Code coverage is a metric used to gauge the completeness of software testing, by identifying which areas of source code in an application were exercised during a test. It provides a convenient way to ensure that applications are not released with untested code. The basic forms of code coverage can be defined as:

For more complex, safety critical, systems a more complex metric based on function coverage and branch coverage known as Modified Condition/Decision Coverage (MC/DC) is used which stipulates that each entry and exit point is invoked, each decision takes every possible outcome, each condition in a decision takes every possible outcome and each condition in a decision is shown to independently affect the outcome of the decision. 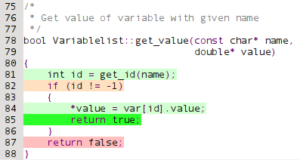 When the test suite is executed, the instrumented application produces data that can later be analyzed.

This analysis can be used to determine how much of the source code has been exercised by the tests, which additional tests need to be written, how the test coverage changed over time and more.

While other code coverage tools typically just accumulate coverage data Squish Coco stores information per individual test. With an optional name and FAIL vs. PASS status assigned. This way various types of analysis can be performed in the post-processing phase:

Code coverage is not a final activity, but rather a continual activity toward a reliable system. The earlier it is employed the better. It provides scope to add tests, improve tests, remove redundant tests, and cover more code, ensuring higher quality and more reliable systems. More details…

For more information on how code coverage analysis using Squish Coco from froglogic can help you gauge the completeness of your software testing please complete the form below.