Static code analysis is where it all begins. Through complete program analysis of syntax, semantics, variable estimation, and control and data flow, static code analysis finds issues that are difficult or impossible to find through manual testing. That’s because SCA is based on application structure and data, covering a much broader set of scenarios than a developer ever could. 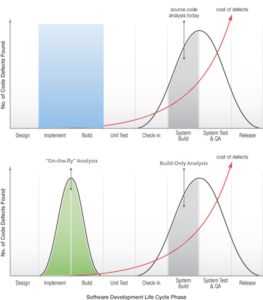 Klocwork takes static code analysis to the next level – making it happen on-the-fly. By bringing the power of analysis to the developer’s desktop and displaying results while lines of code are being written, problems are discovered (and fixed) at the earliest possible point before the build.

The Klocwork static code analysis tools support analysis of C/C++, Java and C# code with in excess of 80 C/C++ compilers supported including those used by embedded software developers and gaming companies.  The Klocwork tools integrate with Visual Studio, IntelliJ IDEA, Android Studio and Eclipse based IDEs, can be integrated with most Continuous Integration systems and work along side all popular source code management systems. More details…