The use of embedded Linux has revolutionised the embedded systems software market giving developers easy access to a range of processor architectures, device drivers and middleware technologies all available without license cost through open source license agreements.

One of the key advantages that Linux offers, relative to traditional proprietary embedded software solutions, is the range of supported hardware, protocols and other technologies which translate into significant savings in the total cost of ownership and a quicker time to market.

SDC Systems have partnered with Timesys to offer their flagship LinuxLink product.  LinuxLink contains the Timesys Factory Build System which has been used worldwide in more than 1,000 projects, and has proven to reduce the time, cost and risk associated with building commercial quality products using open source Linux. 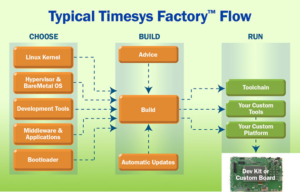 This gives the developer a more reliable starting point for their project and removes the need to search the web for a kernel and user land packages that work with the CPU being used. More details…

If a problem is discovered then being a commercial Linux distribution it is backed up by support who can provide bug fixes and enhancements for any issues discovered.

For those developers who choose not to adopt a commercial embedded Linux system then a community sponsored Linux development framework can provide a better solution than the Linux platform provided by the silicon vendor or creating your own.

One of the most common and longest established of these frameworks is OpenEmbedded which was adopted as the build system for the Yocto Project in 2011.

OpenEmbedded and Yocto use BitBake as their build engine using recipes to build the individual components of the embedded Linux system and to pull them all together to create images that can be deployed to the target hardware.

With the release of LinuxLink 5.0, Timesys have added the “Bakery” alongside their tradition Factory build system.  The Timesys Bakery provides the industry’s easiest way to configure a custom board support package for Yocto Project based development.

Android is a mobile operating system, developed by Google, based on the Linux kernel designed for touchscreen enabled devices such as smartphones and tablets.

As automotive, consumer, medical and industrial devices have evolved, driven in part by the “iPhone user interface effect”, to incorporate touchscreens and network connectivity the use of Android in these applications is more common.

SDC Systems have been able to take their expert knowledge in the fundamentals of the Linux operating system and been able to use them to customise Android for embedded applications.

Whilst the most common configurations of Android are for platforms using an ARM processor core, through our partnership with Insyde Software we are able to provide the Humanos Android-on-x86 platform.

Humanos brings all of the features and benefits of Android to platforms running processors from the Intel Atom family. Alongside Humanos, Insyde Software offer a second product, Insyde Q2S, which allows Windows and Android to be installed onto the same platform and for a user to switch quickly between the two. More details…

One of the tasks common to all device development is to reduce the time taken from applying power to the system being ready for operation. This has typically been a manual process starting with the removal of redundant or unused features and then optimising what remains.

This iterative process eventually gets to a point where the fractions of a second being saved from the boot time no longer justifies the days or weeks of effort required to achieve them. 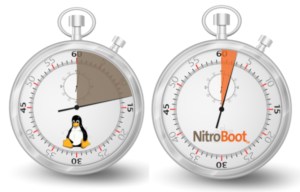 With NitroBoot, from Datalight, manufacturers using Linux or Android based systems can develop automotive In-Vehicle Infotainment (IVI) systems, mobile devices, digital home electronics and much more that can be instantly launched from zero standby power.

This is accomplished by preferentially restoring the memory areas necessary for booting the system.

This technology helps device manufacturers produce unforgettable user experiences and distinguish themselves from the competition.

For more information on how commercial embedded Linux and Android solutions can reduce your development times please complete the form below.

The Android robot is reproduced or modified from work created and shared by Google and used according to terms described in the Creative Commons 3.0 Attribution License.